Hi, y’all! I hope everyone had a great Valentine’s Day!

We had a quiet dinner at home, and then tried to watch a movie, but we were sabotaged by Time Warner… (The cable kept breaking up, so we couldn’t stream through On Demand, and then we tried to rent it on Amazon, and the internet wouldn’t support the streaming, either. First world problems!)

We love steak, especially good steaks. I think we can all agree that grilled steaks are possibly the best preparation, but what do you do when it just doesn’t work to fire up the grill? We would like to have the built-in indoor grill in our forever house, but since we’re not quite there yet, we have to have a good solution in the mean time. And we do– the good ole cast iron skillet.

Honestly, cast iron skillets are the only skillet/ frying pans I use. I think this is because that’s all my mom ever used growing up (and to this day), and that’s mainly what Steven’s mom uses as well. They are a little more high maintenance than a non-stick– NO dishwasher, no soaking, no long term exposure to water of any kind, but they last FOREVER if you take good care of them. We have two large ones, and they handle anything we need from cooking eggs to frying chicken to sautéing vegetables, you name it. And, now they are great for steaks. I’ve put together a little step by step for how I do steaks in the cast iron skillet, and I hope that you try it out!

For this special occasion, I chose tenderloin steaks (also known as filets or filet mignon). If  you are looking for something absolutely to die for, and have more than two people to cook for, I HIGHLY recommend a tenderloin roast. You may go broke purchasing it, but it is one of the most delicious things I have ever eaten. It’s just not feasible to do a tenderloin roast for two people, so the meat department at HEB recommended the tenderloin steaks instead and they are super delicious as well!

The first time I did tenderloins, I got them from the meat counter and talked for a few minutes with a butcher about what would be best. He recommended HEB Prime, and they were delicious. When I went to the store on Tuesday, there was a line waiting to get custom cuts, so I grabbed a pre-packaged set from under the meat counter of choice tenderloin steaks. I have also used this recipe for other steaks (sirloins, rib-eyes, etc.) and it works just as well.

One big thing that I have started doing that I think makes a big difference is letting the meat “rest” (sit out and come to room temperature). So, I pull them out of the packaging, set them on a cutting board, rub them with olive oil and seasoning (on both sides), and let them sit out for as long as I can.

I use the Perini Ranch rub recipe for seasoning and put this rub on basically any meat that comes through our kitchen (steaks, roast, ribs, etc.). One, because it is delicious. Two, because I basically used our entire spice supply to make this and never remember to buy anything else at the store so it’s what we have… It gives everything good flavor without being overwhelming. 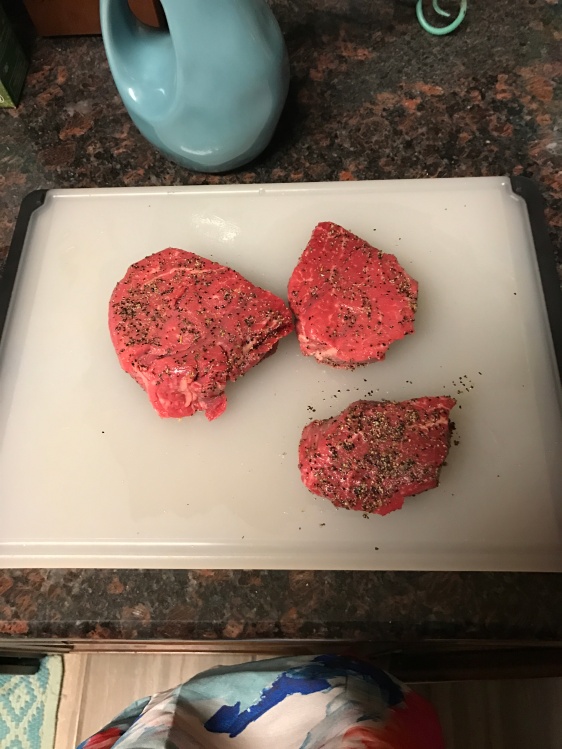 While your steaks are resting, get the skillet ready. I preheat the oven to 400-425 degrees- depending on what else I am cooking- the hotter the better, but if other things need to go in there, you have to compromise (Blessed be the day we get a double oven!).

I turn the heat under the skillet to medium high to high, coat the entire bottom with olive oil and a few pats of butter. Make sure the olive oil goes in first and sits for a few seconds, otherwise your butter will burn away. I based my recipe loosely on a recipe told to us by Sophie Hudson during an episode of The Big Boo Cast. Her directions were (and I quote) to get the skillet so hot, “you wonder if this is wise”. And I do typically wonder if I am being wise with how hot it gets. But it works!

Please enjoy this silent (except for sizzling) video of me searing these steaks. I considered talking during this, and then remembered that I sound ridiculous talking on camera so I refrained. 🙂 The entire video is about 3.5 minutes long, so that’s about how long it takes to sear both sides, give or take a little on the size of your steaks.

After each side is seared, put them and the entire skillet in the oven (making sure you take any non-oven safe accessories off- like my silicone handle covers). The longer you leave them in the oven, the more done your centers will be. I left ours about 5-7 minutes, and we ended up being about medium rare to medium (Steven’s wasn’t as done as mine because it was thicker). The longer you leave them, the less tender they will be as well.

I used to order steak in restaurants well done, and over the last five years or so, I’ve progressively ordered it less and less done, so I typically order medium at this point. I’ve found that it turns out much more tender this way. Tenderloins are the most tender of all (to me at least!), so I think they are better if you don’t overcook them.

Once you take them out of the oven, set them on a plate (covered) and let them rest for five or ten minutes before you eat them. This gives them a chance to soak up some of the juices and get even more tender. You don’t have to leave them a long time (not long enough to get cold or anything), but just a little extra step while you get everything else ready. 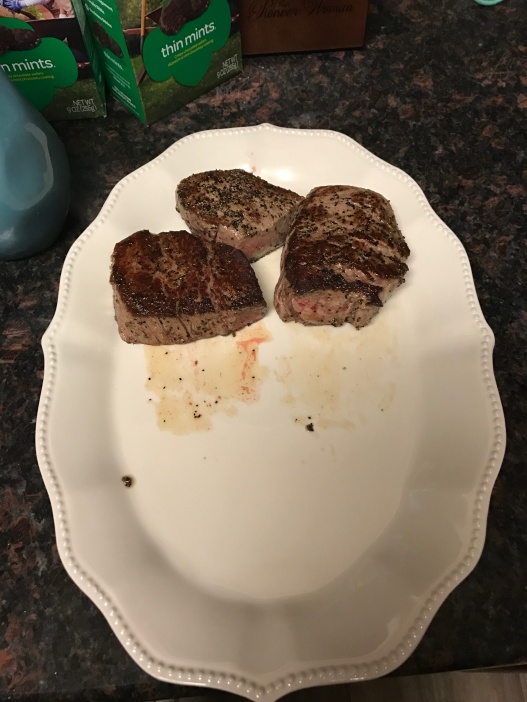 All in all, it’s not a huge time commitment, but you do have to be pretty actively involved during the searing and oven phases to keep from overcooking them. This is a great alternative if you need an indoor steak option!

Thanks for stopping by, and drop by again tomorrow for some Friday Fave Five Things!

One thought on “Dinner for Two- Cast Iron Skillet Steaks”