Alright, y’all- we did it. We went to the State Fair for the first time!

If you don’t take a selfie with Big Tex, did you even go to the State Fair?  😉

We came, we saw, we ate way too much. It was the perfect fair day!

*Tip: We bought our tickets online the night before and this saved SO MUCH time and money. The combo pack included two admission tickets (which were half of the gate price once we got there) and a $50 voucher for food coupons (which was plenty for the two of us). We bought them the night before and printed them out ourselves. If you know you are going, I would definitely recommend doing this ahead of time!

For all of you on pins and needles since the last #FaveFiveFriday update, Steven got his perfect turkey leg! 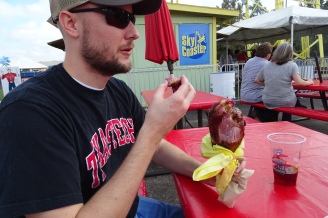 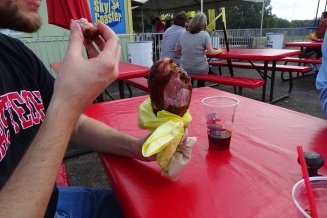 And he was sweet enough to share it with me! I chose the corn dog… 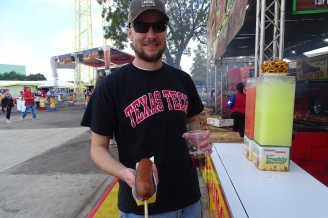 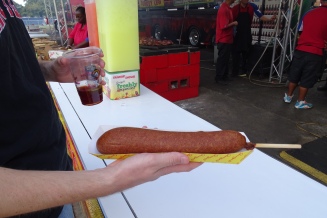 I took approximately twenty seven bites of this thing and it didn’t even look like I made a dent. Steven and I traded for a while, but we still couldn’t finish either one. We got them from the Juicy’s stand, which was recommended to us by a friend, and they were delicious! They had open smokers/ BBQ pits and it smelled sooooo wonderful! Plus, they had picnic tables nearby that we were able to use so we didn’t have to try to walk and eat. 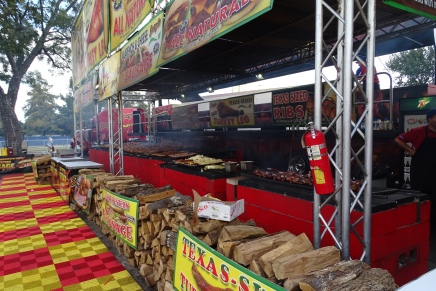 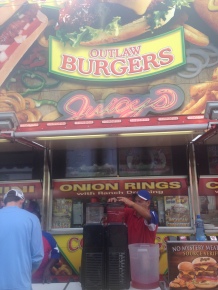 Avery had a turkey leg as well, but Shelby went for the Fried Mac-n-Cheese Sliders, which she gave a thumbs up! 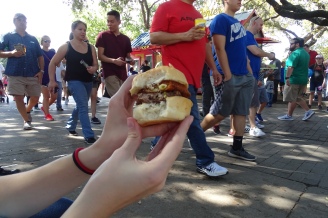 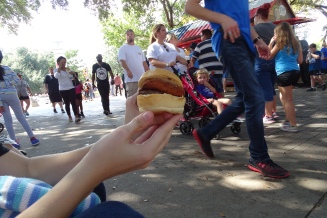 Our other fried indulgence was fried Oreos… Holy smokes! They were delicious, but they were RICH! (And I could make a career of eating desserts!) 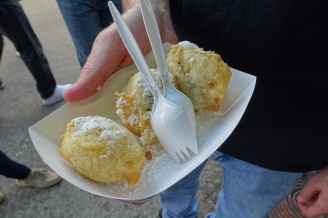 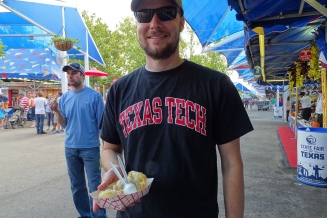 Runner Ups for consideration: Fried Reese’s PB Cups with ice cream; Fried Snickers; Fried Millionaire Pie; Cookie Fries; Funnel Cake Fries– All of these sounded delicious but everything is so rich and so pricy that you kinda have to pick and choose. If I could have gotten just a bite of everything, that would have been perfect!

The rest of Steven’s wish list included: roasted corn on the cob, tamales, fried cherry pie, and Frito pie/ chili dog/ something with chili. But a person can only eat so much in one day, especially while walking around in the hot sun!

After eating, we hit up the midway for a little gaming fun! 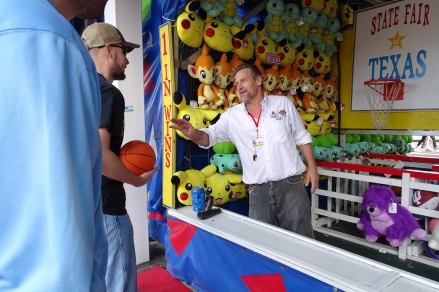 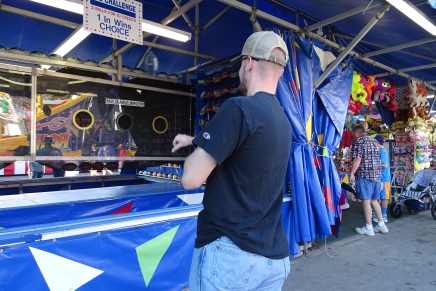 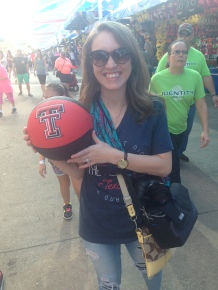 We started out playing a basketball game, and they gave Steven 3 shots for his credits. He missed all 3, but the man running the game offered us a bonus shot– for me to take. For those of y’all that have known me for years, you may know that my sports career began and ended with the 7th grade basketball C team. BUT!  I threw it up, bounced it off the light on the ceiling, and made the luckiest shot ever! And that’s how we ended up with our very own Tech basketball!  🙂

We played several more games, and Steven won two red sock monkeys (for the boys), and a giant stuffed monkey before we tried to decide what to do to finish our tickets. Steven was most interested in trying to win a Spurs basketball, so we decided it was better to try at that and possibly not win, rather than try something easier to win and end up with more junk we didn’t need. And… HE MADE IT!!! So, all said and done, we carried a ton of junk (including 2 basketballs) all around the fair.

We took pictures with Big Tex… 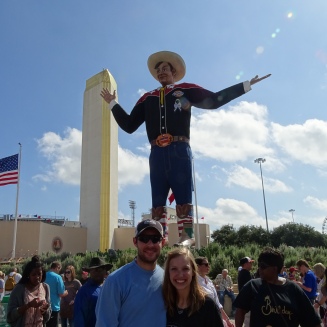 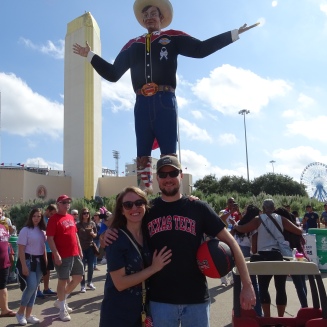 We checked out the exhibit hall, which included the Grammy Museum exhibit of Taylor Swift, a photography show of western art, and a museum exhibit on cowboy history… 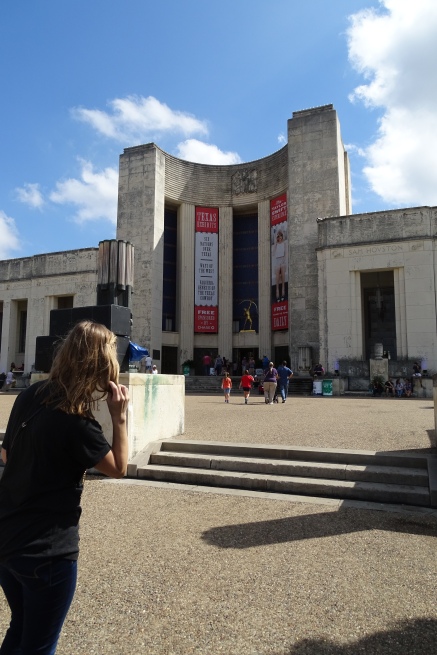 After this, we checked out the Wild West Pet Palooza- this is a free show in one of the amphitheaters featuring trained rescue pets. It was so cute! They even had a trained pig. I’m just gonna tell y’all this now because it will likely be a recurring theme– I love me some pigs. Live ones, stuffed ones, caricature ones- you name a pig, I’ll love it. Especially a cute rescue one that can do tricks. 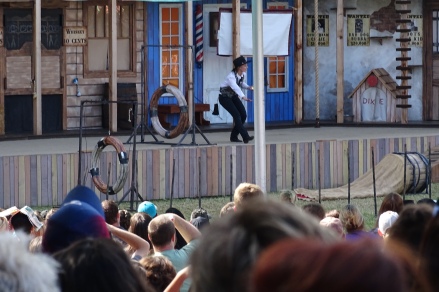 While we were sitting and waiting for the show to start, we watched a person sky dive in with a flag and the game ball for the Air Force/ New Mexico game at the Cotton Bowl. 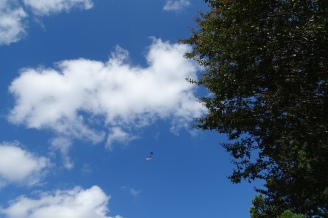 Following the pet show, we tried to make it across the grounds to get to the pig races, but couldn’t find them. So, I bought Steven and me matching t-shirts instead 😉

We checked out all the livestock in the show barns, and found Boris, the world’s largest hog… 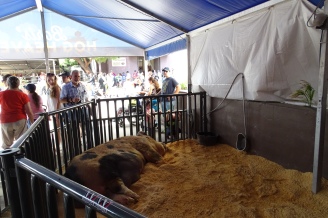 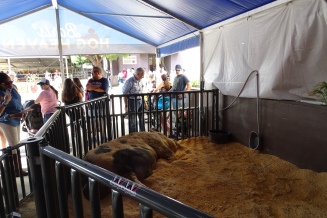 Boris did not look like he was enjoying the 90 degree weather, but I’m not sure anyone there really was  😉

Overall, we gave our first State Fair of Texas experience two thumbs up! We love Texas and we love the State Fair! 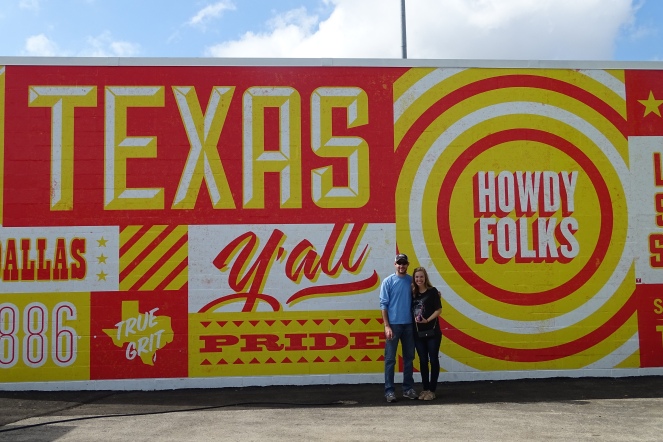 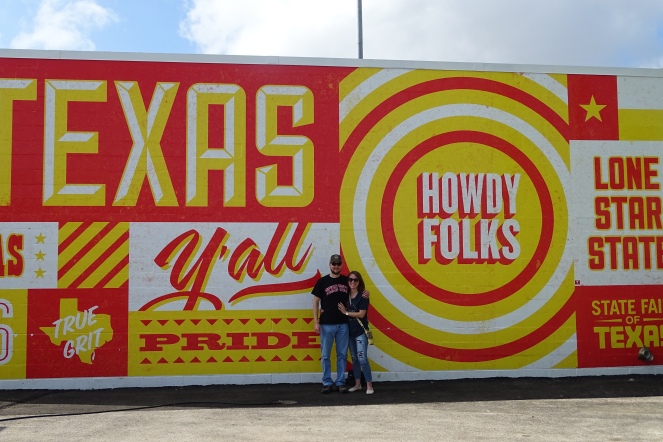 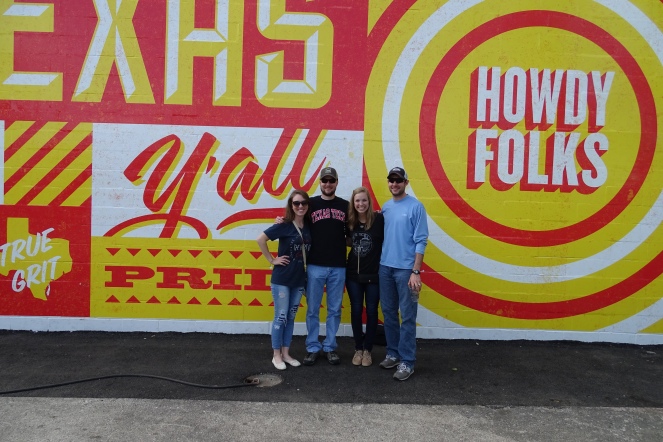 And this sweet munchkin was a champ on the drive (he’s my little snuggle buddy  🙂 ). One of my favorite pictures of Ruger is of him sitting on Steven’s truck console smiling on our way to go fishing in the summer, so I was trying to duplicate it, but it was a little dark. And he’s quickly outgrowing the console! 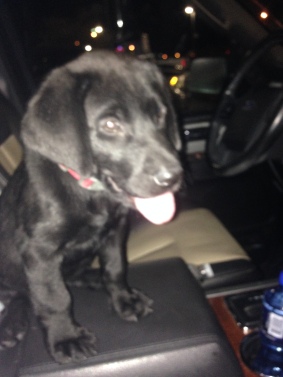 I want to hear all about y’all’s State Fair experiences! Drop me some tips or funny stories here in the comments!