Happy Friday, y’all! It’s time again for some #favefivethings! I hope y’all have been having a great week, and are looking forward to some wonderful weekend plans! Things are kinda quiet and wonky around here because Steven has been working the night shift for the last two weeks, so I’ve been doing a lot of crafting, and working on our house, and sitting around watching TV (you know, important stuff!). If you were to ask him, his favorite things this week would be Bold Chex Mix, Peppered Old Trapper Beef Jerky, and king-sized Twix because that’s what he’s been taking with him every night to eat while working. It’s been very nutritious around here lately. And now he’s got me hooked on the Bold Chex Mix. So there’s rec #1… Just kidding! But, here are five other things you should check out!

This book is probably in my top favorite books of all time at this point. Which says a lot, because I read a lot! Sophie Hudson is one of the funniest people I could ever hope to meet in my real adult life and I soak up anything Sophie, including her blog (Boo Mama Blog) and her Podcast with fellow fave author of mine, Melanie Shankle (Big Mama Blog). If you want to embarrass yourself by laughing out loud in a crowded airport (which I may or may not have done), read one of Sophie’s books during the never-ending wait on a layover. You will not be sorry.

So, Sophie’s other two books (which I also highly recommend) are mainly anecdotal with light strings of Scripture and overall themes tying them together, which I really enjoy. This book, however, is the exact opposite. The meat and potatoes of this book is Scripture, noting the power and importance of relationships of Biblical women, with personal anecdotes tying it all together. Three sections describe the aspects of the relationships of Mary and Elizabeth, Naomi and Ruth, and Lois and Eunice, and how we can use these relationships as examples for our present day life. So, it has moving and inspirational Biblical themes, as well as some of the funniest stories I’ve ever read. What more could you ask for??

It is available at all major book sellers (Amazon, Barnes & Noble, Books A Million, etc), as well as Christian life stores (Lifeway, Mardel, etc.). I recommend reading it, and then passing it on to a woman who has helped shape your life. I did!

Girls, are y’all in the habit of putting on lips everyday? I know I’m not, but I’m trying to be better! Obviously full face looks better with lips than without, but here’s where I’m coming from: this would be much easier to do if you just put it on while you get ready in the morning and then start your day.

And here’s the issue with that: West Texas Wind. While I understand I’m not in West Texas Wind anymore, old habits die hard. West Texas Wind makes it impossible to put lips on before you leave the house and get to your intended destination without enough dirt and grit on your lips to qualify as 100 grit sandpaper. This is especially true if you are a Texas Tech student and have to walk a mile to class. Can I get an amen (and a Wreck ‘Em?)?

With that in mind, I have graduated to lip choices that I know will look good no matter where I end up having to put it on, depending on my end destination (which could be in the car while driving, walking up stairs, running across a parking lot, or a whole plethora of strange things. You just never know…). Normally this isn’t a huge issue. I don’t generally step out on make up very often, especially with lips. But, within the last few years, I’ve been very drawn to the red lip, and high color lips in general. And red lips are NOT something you do while running up outdoor stairs into offices. They require intense concentration in the bathroom mirror.

Well, this was my attempt at finding an easy red lip on the go. Honestly, this is not it, but I ended up liking it anyway. The red turns more pink when it’s on, but the texture is good and I like the color even if it isn’t really red. So, I’m still on the lookout for an easy red lip. But I’ll be using this in the mean time!

I’ll admit, I’ve been a NEEDTOBREATHE fan for a while, and kinda loop around with them. I’ll go through a phase where I listen to them a lot, then take a break, and then circle back. And I always circle back and marvel at how good they are. They are another group that sneaks in the good vibes and Christian messages without being super obvious about it. And if you haven’t ever heard their song “Garden”, you should immediately by clicking here. It is gorgeous, and right now listed as the song I want played at my funeral. Which, I realize is really strange, but that’s just how I feel.

But their newest album, Hard Love, is probably one of my favorites. I dare any human being to sit through “When I Sing” without dancing. It’s a sheer impossibility. “Happiness” is the radio single getting play right now, and it’s probably my second favorite.

What is even better than this amazing album is the fact they are now on the Tour de Compadres with Parachute (who I also love), Mat Kearney, and Welshly Arms. Texas people, they are playing Houston, Lubbock, Abilene, Grand Prairie, and Austin, which means there are PLENTY of opportunities to hit this amazingness up!!

This is an adorable shop I’ve just discovered based in Abilene, TX. They design and make custom tees and tanks with the most adorable designs! Many are Texas themes, which fly really well in this household. My sister-in-law, Shelby, sent me this one for my birthday and I’ve been wearing it non-stop since!

Sorry, I’m not the best selfie taker! Yes, that is the chorus to Deep in the Heart of Texas, one of the best songs known to man. And, I rocked Friday (FriYAY!) in my “Deep in the Heart of Texas” tee thanks to Oliver and Otis! What’s better than the adorable designs is the super soft fabric and how comfy the shirt is! This is a medium, but it’s been washed and dried several times, so it’s a little shrunken from what it was at first. Check out oliverandotis.com for more adorable tees! You won’t regret it! 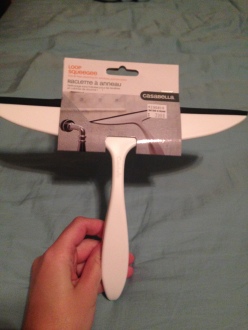 Ok, y’all may think this one is a little lame. But if you have a glass shower door, you will want to know this. We faithfully wipe our glass shower doors down after every shower because we have hard water here and get build up pretty easily. And even with doing that, the towel leaves enough water on the doors to make ugly water spots.

After much Pinterest research, I tried out a suggestion for vinegar and dish soap cleaner to get rid of built-up hard water spots (which totally worked, and I didn’t even have to scrub!!). But, I wanted to make sure this wasn’t something that continued to build up if we could help it. Cue this guy from Bed, Bath, and Beyond. I was actually there for something else with a gift card in hand, and thought, for $3.99, why not? And it has been worth every penny. Long (probably boring) story short, if you’ve got glass shower doors, invest in some vinegar, and invest in a squeegee. You’ll save yourself a lot of scrubbing!

Those are our five things for this week! Leave any suggestions here in the comments! Ruger and I like to read them! 🙂

And, as always, Wreck ’em, Tech! If you hear yelling and general rowdiness from the Temple, TX area tomorrow, know that it is Ruger and me being good Tech fans as they take on Arizona State. Long live the Matadors!